Get on the path to a straighter smile today!*

Can my dentist see signs of sleep apnea? 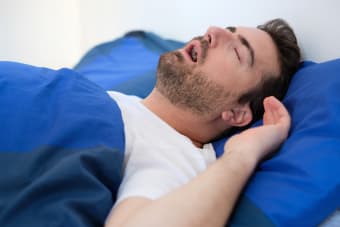 Do you regularly wake up feeling exhausted even after sleeping all night? If so, you may be experiencing sleep apnea. Because of the effect that sleep apnea has on the teeth, dentists are often the first to notice signs of this serious sleep disorder.

When an individual suffers from sleep apnea, their breathing will be repeatedly interrupted while they sleep. These pauses can be caused by a lack of respiratory effort, physical blockage of airflow, or a combination of both. Pauses can last anywhere from a few seconds to minutes and may occur 30 or more times per hour.

Signs of Sleep Apnea Your Dentist May Notice

Sleep apnea can have an effect on your oral health. Here are some signs of the condition your dentist may notice:

The most common form of sleep apnea is called Obstructive Sleep Apnea (OSA). OSA is caused by a physical blockage of airflow when sleeping. Along with the above oral health signs, common symptoms of OSA include choking or gasping while attempting to sleep, waking frequently during the night, night sweats, morning headaches, loud snoring, high blood pressure, and dry mouth when waking.

As you can imagine, these symptoms often lead to a poor night's sleep leaving patients feeling fatigued throughout the day. Sleep apnea is also linked to an increased risk of other health conditions such as heart disease, obesity, high blood pressure, and diabetes.

How can my dentist help?

Dentists cannot diagnose sleep apnea. However, they are often some of the first people who can spot symptoms or let you know if you have an increased risk of developing the condition since your jaw and related structures can contribute to OSA.

Your dentist can conduct a dental exam and take X-rays of your neck and mouth, which might reveal abnormally large tissues in the throat or other blockage in the airway. If they notice any physical blockages they will recommend you visit your doctor.

At Proactive Dental Studio we offer a wide range of dental services. Contact us today to learn more.

Contact ProActive Dental Studio today, and get on the path to a brighter, healthier smile!